Vetrazzo Recycling Program to Benefit Habitat for Humanity at KBIS 2014 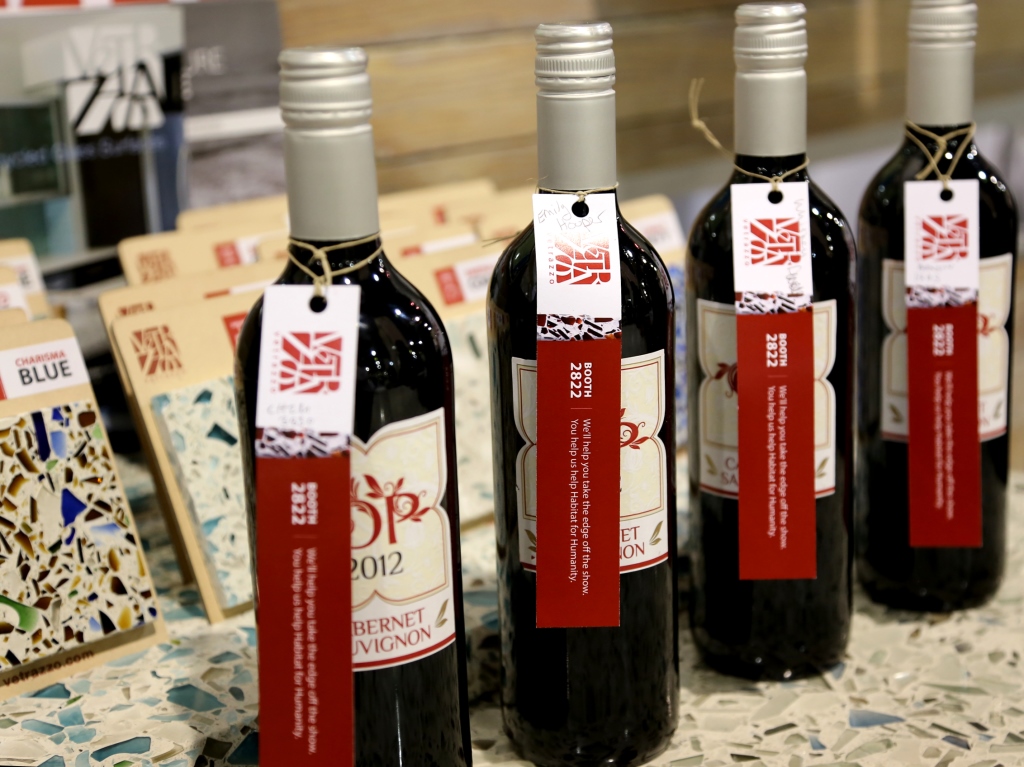 Recycled glass surface manufacturer, Vetrazzo will be call on help from the crowd at the 2014 Kitchen &Bath Industry Show (KBIS) in Las Vegas, NV to support it’s ongoing partnership with Habitat for Humanity.

This partnership entails a recycling program that starts in the Vetrazzo Booth. Complimentary bottles of wine are passed out to the crowd and returned to the booth by the end of the show. Vetrazzo collects this glass at tradeshows and other events and after the show, the glass is transported to Vetrazzo’s manufacturing facilities in Tate, GA where it is made into 9’x 5’ slab surfaces.

The slabs are then donated to individual Habitat chapters that partner with Vetrazzo prior to the event. The program has been marked by two initial editions and will be implemented for a third time at KBIS 2014.

In 2013, Vetrazzo and two Habitat for Humanity chapters successfully partnered in the initial editions of the recycling program. At Greenbuild, held in Philadelphia Pennsylvania in November, the company handed out bottles of wine to guests and fellow exhibitors at its booth. While recipients were encouraged to enjoy the wine, they were also asked to bring the empty bottles back by the end of the show. All bottles collected are in the process of being turned into a beautiful 9’ x 5’ slab which will soon be donated to the Lancaster Area Habitat for Humanity, the designated recipient.

“Not only is it an innovative and eco-friendly program that benefits Habitat, but it also directly impacts the thousands of families that our organization reaches,” said Stacie Reidenbaugh, executive director, Lancaster Area Habitat for Humanity. “Vetrazzo shows that recycled materials are not only a viable option for residential buildings, but can also be collected and promoted in creative ways.”

In December, Vetrazzo sponsored the Tucson Vision House presented by GreenBuilder Media. The Vision House acts as a model home for green design and construction, and offered an ideal backdrop to promote the second edition of the recycling program. Vetrazzo partnered with Habitat for Humanity Tucson collecting wine and beer bottles from the home’s grand opening event.

A third edition of the program is planned for the upcoming 2014 KBIS in February. The show acts as the voice of the kitchen and bath industry and for the first time will coincide with the International Builders Show (IBS) in Las Vegas. Vetrazzo is proud to announce that Habitat for Humanity Las Vegas will be the recipient of the recycled surface material resulting from the bottles collected at the show.
About Vetrazzo
Vetrazzo® is a recycled glass surface comprised of 100% recycled glass. From architectural to art glass, to beer bottles and jars, each surface mix is a signature blend of color and life that tells a story. Vetrazzo® was invented by a passionate glass scientist in 1996 in Berkeley, California – back when “green” was just a color. In 2010, Vetrazzo was acquired by Polycor Inc, the largest and most diversified fully-integrated granite and marble group in North America. Vetrazzo is manufactured at Polycor’s Georgia Marble plant in Tate, Georgia. Visit www.vetrazzo.com for more information.