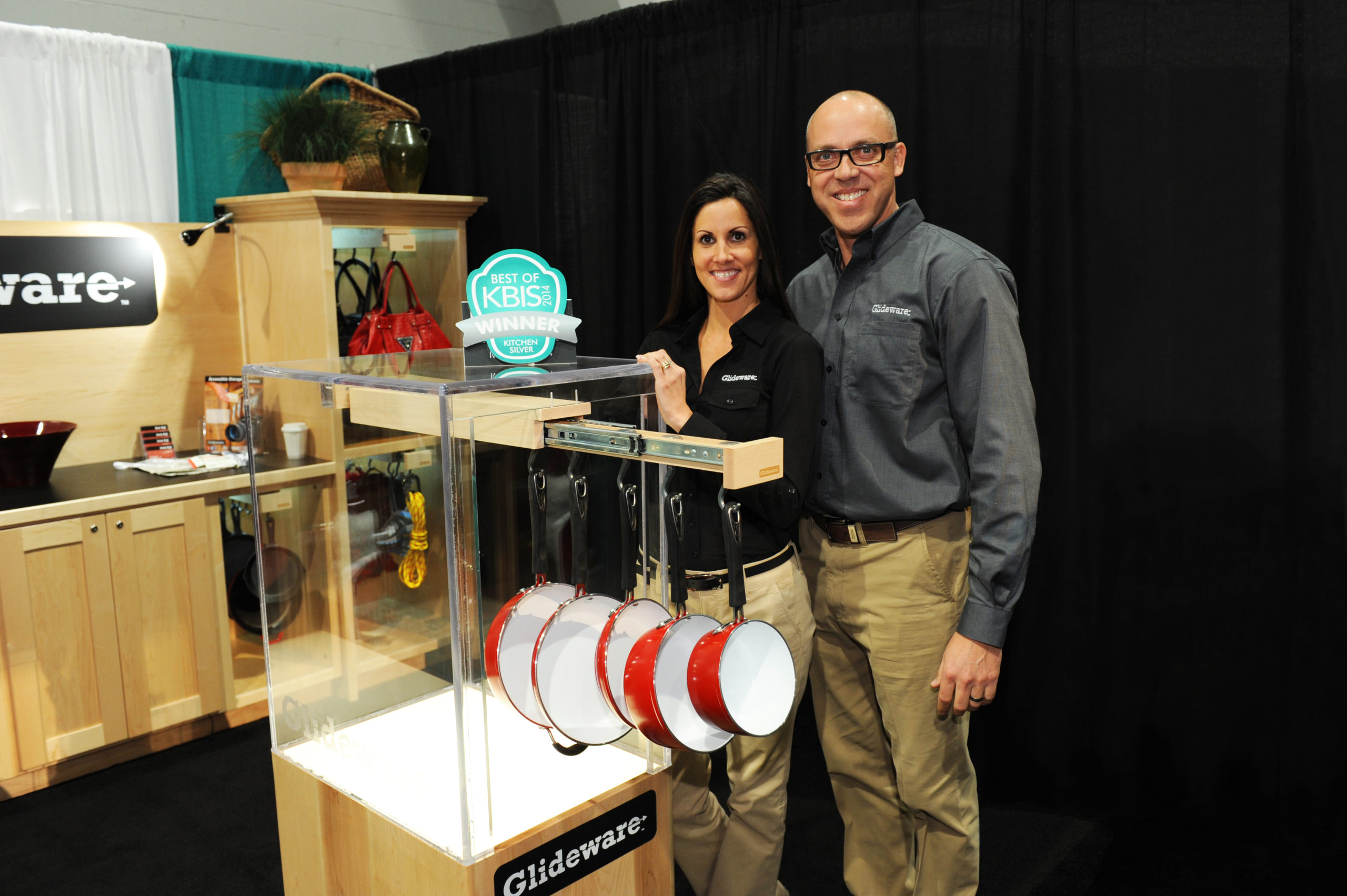 It started with a sketch on a napkin – like so many innovations do. In fact, it really began with the receipt of new cookware, which in turn, begged the question “how the heck am I to store this stuff and keep its non-stick surface fresh and undamaged?”

For Dave and Jenny Hall, it was this gift three years ago, and the ensuing storage dilemma that led them down the uncharted waters of entrepreneurship.

“We realized the drawer that held our old pots and pans wasn’t going to work,” said Dave Hall, co-founder Glideware. “If we stacked the pans, we would scratch the Teflon® coating. So Jenny, my wife, charged me with finding a solution aka, “honey-do project.”

Hours of exhaustive searching turned up no good options. After Jenny sketched an idea on a napkin, Dave put his training as a construction manager to work. He began noodling in the garage and cobbled together the idea that grew into an object that changed the face of the kitchen storage industry in less than two years.

The Glideware vertical storage design, named in part because the hanging pots and pans glide in and out of the cabinet without banging together, takes no more storage space than traditional cabinet drawers and organizers, and does it so much better.

“For more than three months we searched to devise our own solution,” Jenny Hall, wife and co-founder, Glideware says. “Dave continued to refine and tweak the hardware. The true test came when I opened the cabinet and he surprised me with a completely installed, functional product that really worked. Our friends were intrigued, even asking us to build one for their own kitchens. It was a lightbulb moment for us.”

A true family affair, Dave and Jenny have involved their two children in many decisions from the get-go. It was with their encouragement that the Halls utilized Kickstarter to get going and test the waters.

“Immediately after the Kickstarter campaign ended, we sold almost 10 units through our site the first week. We weren’t even sure how we were going to fulfill the orders, but we knew we had something,” said Jenny.

The Kickstarter campaign managed to raise $34K against their initial goal of $30K. They were officially in business and needed to start thinking about next steps.

“We started to think about how to get some exposure. As we learned more about who and where we might best sell and promote, we discovered the National Kitchen & Bath Association. The group supports the kitchen and bath design community as well as manufacturers and distributors. It seemed to make sense to join and see how we might leverage the association contacts and credentials.”

A phone call connected them to Donna Baldino, who was their NKBA representative. Baldino made a trip to see the product and meet the Halls.

“After I described the product on our call, Donna told me she just had to see it. I didn’t think she would be on my doorstep a few days later, but there she stood,” Dave remembers. “I walked her into our kitchen, pulled out the Glideware prototype, and her first words were, ‘Dave, you don’t know what you have here.”

They found an ally and a friend in Baldino. She was their biggest fan, and gave a lot of free advice, including pointing them in the direction of two kitchen and bath industry hardware pros – David Noe of Rev-A-Shelf and Karl Rudisser of Blum. Noe and Rudisser acted as mentors to the Halls, helping them to focus their efforts and navigate the entrepreneurial road ahead.

“Donna, David and Karl understood that we took a different view of “business”. This is very personal to Jenny and me,” said Dave. “And because of that, they went out of their way to mentor, and befriend us. And in turn, they’ve encouraged us to mentor other up-and-comers.”

At the urging of Noe and Rudisser, Dave and Jenny took their invention to the annual Kitchen and Bath Industry Show (KBIS) to introduce it to the industry at large. It was a scary time. They would either get the validation they needed, or go home without any endorsement. “Regardless of how much we love our own product, it’s the customer’s that make or break a brand.” After a family vote, they made the call and signed up to show at KBIS.

The Halls knew they wanted to oversee all aspects of production, which meant keeping manufacturing in the U.S. It also meant the daunting task of learning the ins-and-outs of product processes, timing and costs, who to trust and how to meet orders. They turned to Baldino once again who pointed them in an unusual direction – a basket maker.

Just starting off, the Halls were able to work with the manufacturer to create a hundred Glideware organizers. Dave met with the workshop project manager regularly, and with the members of the production team, carefully examining each device for quality as it came off the “line.” The Halls commitment to making a quality product or none at all, set the tone for the fledgling business.

Making an Entrance with a Bang

The Halls were encouraged to enter the Glideware™ product into the Best of KBIS competition. This was an opportunity for Glideware be seen, and possibly acknowledged as a stand-out item among the many brands at KBIS. This trade show is where the likes of mega brands like Kohler, Electrolux, and Silestone launch their newest and greatest products. The Best of KBIS display wall would provide them with a platform to show off something that might otherwise get lost. At the least they hoped to receive some recognition by being featured on “Best of KBIS wall.” They did not expect to win, but win they did, taking Best of KBIS Kitchen – Silver.

Glideware is now selling in over 37 states and online. The brand is currently making its mark in Canada as well. And, in addition to winning the Best of KBIS award, Glideware has been recognized on the This Old House Magazine list of the 100 Best New Home Products of 2014. The Hall’s believe their membership in the NKBA (that led to the introduction to Noe and Rudisser, as well as Baldino’s push to follow their guts) has fed the sharp growth of the company. That growth is expected to continue over the next five years as a result of new distribution agreements, improved domestic manufacturing processes, and line extensions already in the works.

“The whole process of starting this business has been like free- falling forward,” explains Dave. “Personally, I’ve found designing the first product, as well as our new products debuting in January, a natural fit with my skill sets and background in construction. But I look at it this way: a lot of people have interesting ideas – they just don’t act on them. With the help of several folks who encouraged us to believe, we stepped over the line and did something. That’s an amazing feeling.”

Launched in 2013, after struggling to find a solid solution for storing a new set of cookware, Jenny and Dave Hall began Glideware™ with a mission to invent new ways to organize “stuff”. The original product was a one-of-a-kind hardware innovation, recognized as a Best of the Kitchen & Bath Industry Show winner, and one of This Old House Magazines’ top 100 products. Today, the Glideware portfolio has evolved into a full complement of organization solutions for closets, mud rooms, lockers, vanities and kitchens – indoors and out – all proudly made in America. View the complete Glideware product series at Glideware.com. 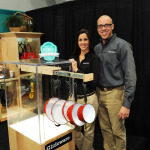