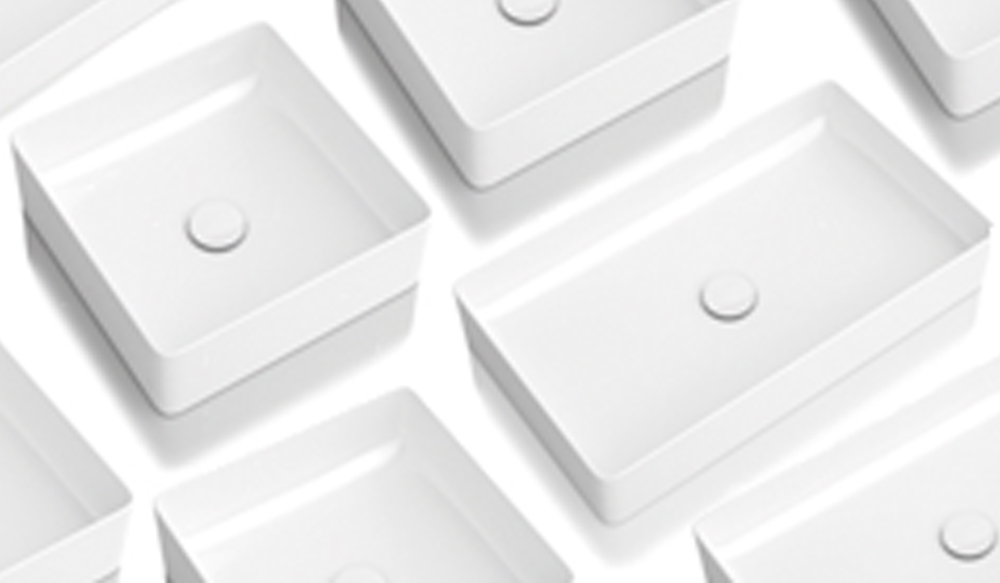 LAUFEN, the creators of the bathroom as a living space has announced the first series of products using SaphirKeramik, a revolutionary material two years in the making. The new ceramic created using SaphirKeramik is considerably harder and has a greater flexural strength than vitreous or fireclay ceramic. SaphirKeramik turns the old material into completely new shapes: closely defined radii and edges are possible with thin walls which have until now not been seen in sanitary ceramic.

LAUFEN named the material SaphirKeramik to reference the addition of the mineral corundum, which occurs in nature in different modifications as a component of sapphire. This mineral is also used in the watch industry as sapphire glass dials and its hardness is only surpassed by that of diamonds.

“At LAUFEN, we never stop thinking about improving both our designs and the manufacturing and technology we use to create our products,” said Mike Teresso, president of LAUFEN Bathrooms North America. “Research Director at LAUFEN, Dr. Werner Fischer, developed the SaphirKeramik together with his team and various university research institutes and he worked on the ‘recipe’ for almost a decade. It’s this level of commitment to development that drives us and keeps us on the forefront of the industry.”

Until now, ceramic design was limited to vitreous china and fine fireclay. Vitreous china excels because of its waterproof qualities but it cannot be used to manufacture large ceramic pieces. Fireclay has traditionally been used to manufacture pieces such as LAUFEN’s Tam Tam or Menhir, both large floor-standing vessels. With SaphirKeramik, the hardness of the material permits shapes which were previously not possible. A more delicate design language, more defined in shape and line, becomes possible – exactly matching the ideas behind contemporary architectural design.

Benefits of Saphir Keramik are:

• Hygiene – the material is insensitive to abrasive cleaners and mechanical abrasion.

• Flexural strength – the material is measured at an average of over 120 kp/mm² – which is comparable with steel and twice as high as that of vitreous china.

• Thinner – the greater hardness permits thinner walls and simplified structure of the ceramic parts, which in turn results in less material, lower weights and benefits in terms of sustainability: fewer raw materials are required and lower energy consumption in firing, production and transport.

• Design possibilities – given the incredibly thin radii of the products: 1 2-mm radii for edges and 2 mm radii for corners are technically feasible with SaphirKeramik. The state of the art for classic ceramics is radii from 7 to 8 mm.

About LAUFEN Having defined bathroom culture since 1892, LAUFEN was the originator of ceramic bathroom products in Switzerland, and is now the leading global manufacturer of complete bathroom solutions for modern lifestyles. LAUFEN has made a commitment and investment in the North American market, and they offer a range of products selected and code approved for North America. LAUFEN has a complete inventory in Miami and Monterrey, Mexico and customer service support in Miami. Renowned for their traditional fine ceramic technique, LAUFEN products exemplify Swiss workmanship; boasting precision, high quality and design.

As the premium brand of the Roca group – the largest ceramic bath product manufacturer worldwide – LAUFEN employs a staff of 2,000 specialists that understand the technology, design and functionality needed to constantly reinvent the bath. With branches in 17 countries and global representation, LAUFEN manufactures over four million ceramic pieces annually. A timeless aesthetic and classic appeal have led designers like Stefano Giovannoni, Wiel Arets for the Italian Design Firm Alessi and Ludovica and Roberto Palomba to invest themselves in the LAUFEN design movement, and as a result of these collaborations, LAUFEN has been the recipient of a number of design awards including Interior Design’s Best of Year (BoY) award in 2008 and 2012, the red dot award in 2009, two GREEN GOOD DESIGN™ Awards in 2010 and the GOOD DESIGN™ Award four years running: 2009, 2010, 2011 and 2012.

Visit LAUFEN at www.laufen.com. For additional information contact DRS and Associates at 818.981.8210 or www.drsandassociates.com.