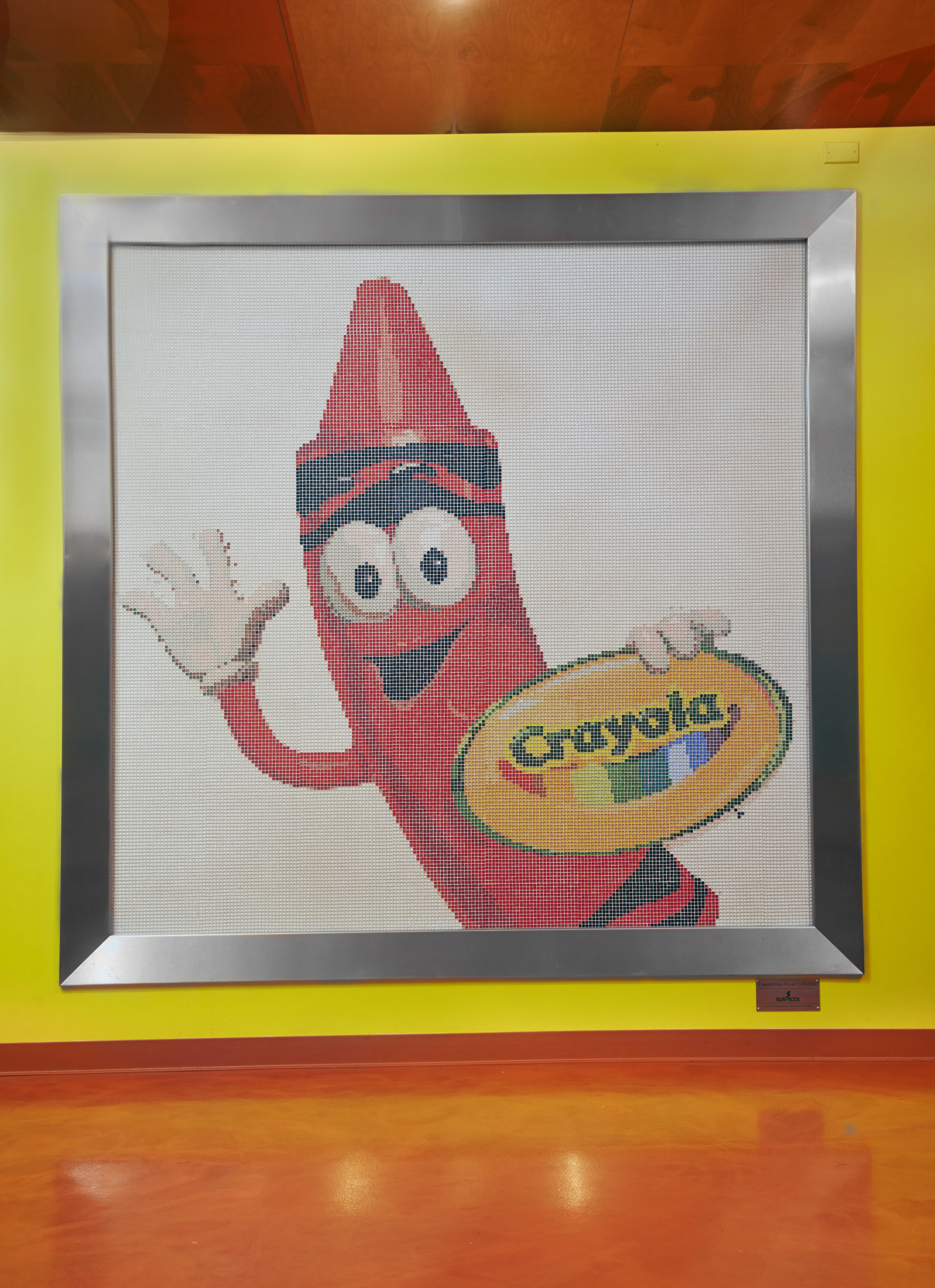 There are many reasons are why Miami-based Surfaces, Inc., one of America’s foremost manufacturers and marketers of glass tile material, decided to bring the Crayola Glass Tile Collection to market. “The name ‘Crayola’ is synonymous with bright, cheerful colors,” stated Albert Claramonte, President of Surfaces, Inc. “It has 99% name recognition in U.S. consumer households.”

A decision was made to create a glass mosaic mural to be installed at Crayola’s national headquarters in Easton, PA. After a number of ideas were submitted, a whimsical illustration of a dancing crayon was approved. This image was then scanned via a special software program that elicited a gigantic pixelated grid, indicating which color of tiny mosaic tile would go where in order to make this glass mural a visual reality. “The actual size of the mural was 8.5′ x 8.5,'” stated Nauro Rezende, marketing manager of Surfaces, Inc. “Thousands of half-inch glass mosaics were mounted via hand on one square foot mesh sheets by our artisans. They followed the computer-generated grid perfectly.”

There were questions relative to which grout material should be used. Rezende stated that a number of products were considered, “all very good materials.” The final decision was to utilize Bostik’s Dimension™ Reflective, Pre-Mixed Urethane Grout, a patented, glass-filled, ready-to-use, water-based product. In particular, because Dimension contains micro glass beads and a translucent, urethane binder that both reflect light as well as allowing it to pass through. This creates a totally unique reflective, three-dimensional effect within glass tile installations.

Just how good was this larger-than-life mural upon completion? According to Claramonte, “It was absolutely outstanding! Glass mosaic tiles reflect both natural and manmade light resulting in a visual experience not unlike when one watches beams of sunlight glistening on streaming water. By combining these color-drenched, exquisite products with Bostik’s Dimension grout material, which from an aesthetic standpoint performs similarly to glass tile, the result couldn’t be better!”