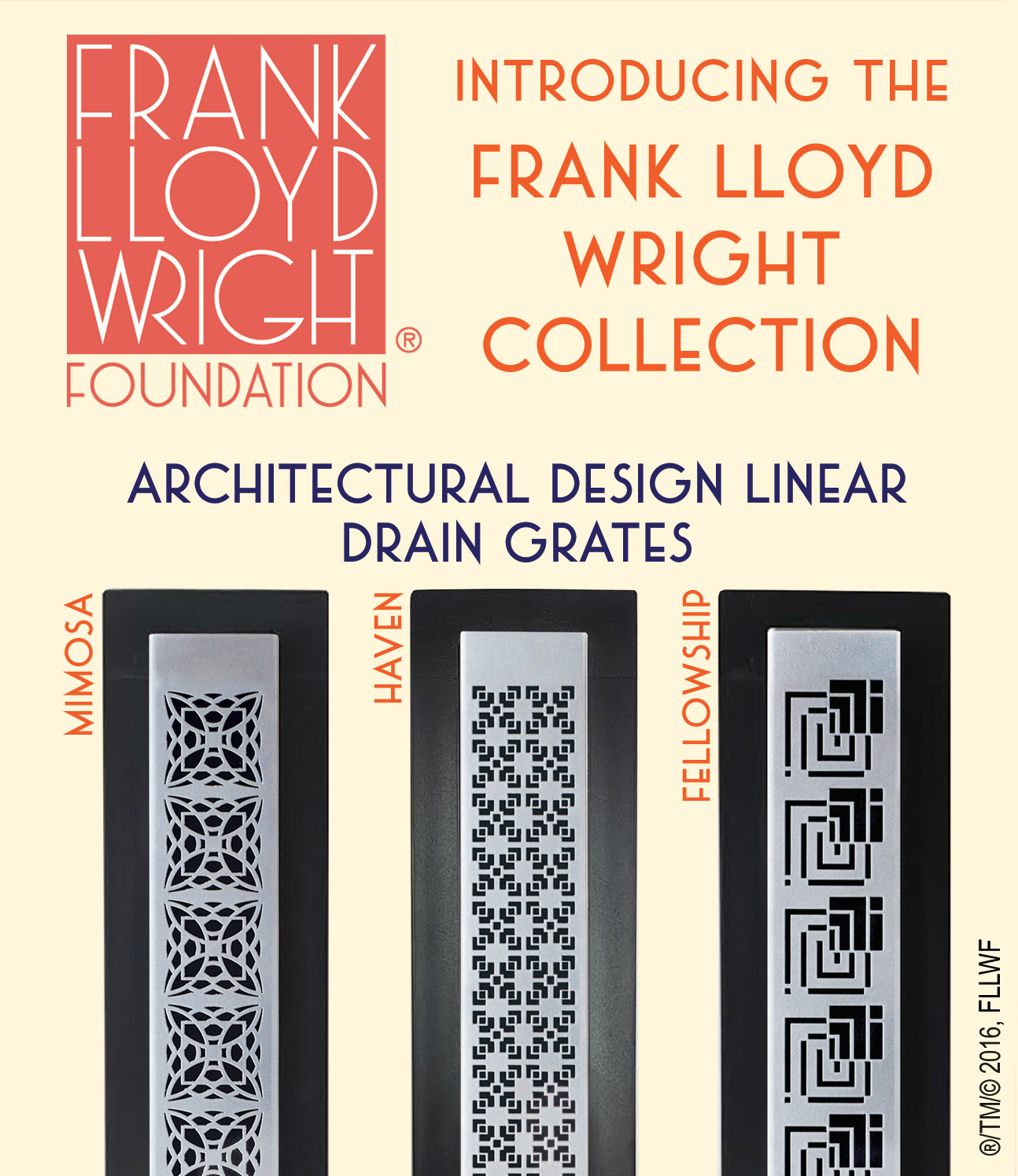 The three new patterns are for installation with the Compotite Linear Drain Body. The high quality, American made, Linear Drain System adds modern style and functionality to any custom tile or stone shower installation.

The Haven pattern is based on a textured concrete construction block designed by Frank Lloyd Wright in the 1920s for the John Storer House in Hollywood, CA. The walls of the home were built using this bas relief giving the appearance of woven fabric with its play of light and shadow.

The Fellowship pattern was adapted from a 1940s design by Frank Lloyd Wright that was his interpretation of an ancient Indian petroglyph found near his winter estate and school, Taliesin West, in Scottsdale, AZ. The design reminded Wright of two hands clasping in friendship.

The Mimosa pattern derives from a glass prism designed by Frank Lloyd Wright in 1897. The design was patented with the US Patent Office as an example of electro-glazed art glass for the Luxfer Prism Company of Chicago. This prism, with its geometric flower pattern composed of circles and squares, was the only one in a series of designs that
was actually produced.

The Frank Lloyd Wright Linear Drain Grates are available in four of today’s most popular sizes: 24”, 32”, 36” and 42”, and are for use only with the Compotite Linear Drain System.

Regarded by many as the greatest American architect of the 20th century, Frank Lloyd Wright was a champion of organic architecture. “Compotite is privileged to have the opportunity to partner with the Frank Lloyd Wright Foundation” stated Alan Hutchins, Compotite Vice President of Business Development. “We are excited to be able to bring his visions to the kitchen and bath designer.”

About Frank Lloyd Wright – Frank Lloyd Wright (1867-1959) spent more than 70 years creating designs that revolutionized the art and architecture of the 20th century. In all, he designed 1,171 works – including houses, offices, churches, schools, libraries, bridges and museums. Of that total, 433 resulted in complete works, 355 of which still exist. Wright also designed furniture, textiles, art glass, lamps, dinnerware and graphic arts. In addition, he was a prolific writer, an educator and a philosopher. He authored 20 books and countless articles, lectured throughout the United States and in Europe, and developed a remarkable plan for decentralizing urban America that continues to be debated by scholars and writers to this day.