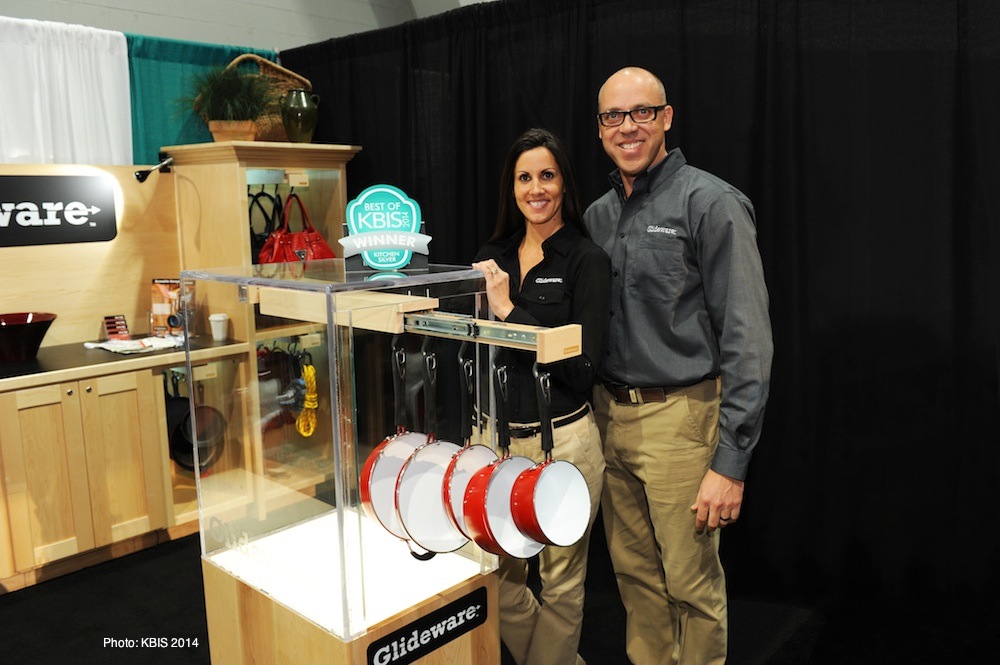 What do names like Delta, Kohler, Dacor, Electrolux, Toto and Glideware have in common? They’re all national award winners at the recent 2014 Kitchen & Bath Industry Show (KBIS) in Las Vegas, Nevada.

What don’t they have in common? All but the last are multi-national, legacy brands, with literally dozens of highly prestigious awards to their credit. Glideware™ was launched just months ago in a Colorado couple’s kitchen.

And well more than just standing out in that behemoth of a crowd as an unknown entity, Glideware™ took the “Best of KBIS” – Kitchen: Silver award, making them the industry’s Cinderella story of the decade.

Billed as the largest kitchen and bath industry event in the nation, this year the KBIS show co-located with the annual International Builders Show (IBS for Design & Construction Week ™) creating what the press called the “mega-event” of design and construction, and resulting in a combined audience draw of over 82,000, including virtually every leading brand name and product developer in the world.

“It was just a surreal experience.” says co-founder, Jenny Hall. “Every big name in the industry was swinging by to see our product including national celebrities and TV shows who shot product features. Jeff Devlin from HGTV came by, James Young from DIY Network, and we even had a “featured product” on Bob Vila’s page in the weeks prior to the show. Bob Vila! He’s legendary!”

All that attention has paid off in dollars and sense as well, with a flood of distributors, cabinetmakers, designers and even some of the industry’s biggest manufacturers paying very close attention. “We’re especially happy about visits from leaders of the world’s largest hardware and accessory companies.” Dave Hall, co-founder, says. “These guys are some of the most respected people in the industry and literally lead the way in new product design. To have them at our booth, complementing our design and manufacturing, testing the product and listening to our pitch, it’s just so far beyond our expectations; I can’t even describe the feeling.”

A pivotal relationship with their manufacturer early in the process helped ensure the product would pass scrutiny of even the most fastidious experts, and the product underwent numerous iterations before being released to the market. The Halls worked extensively to perfect Glideware Synchronized Motion™, which keeps the cookware quiet even as it slides in and out of the cabinet. That was a key element for consumer viability, and a bit of engineering wizardry that is currently Patent Pending protected. “It makes the multitude of hours that Jenny and I spent well into the wee hours of the morning well worth the sacrifices.” Hall concludes.

The Best of KBIS award criteria include attributes such as functionality, flexibility, quality/durability, aesthetics/style and innovation. The simply yet ingenious product installs inside a standard depth cabinet, and slides a 21 piece set of cookware out on a fully extendable rail system, eliminating stacking, stooping and clutter. Its adjustable hook system hold 100 pounds, it installs in minutes with just four screws, and it’s beautifully constructed in the USA from clear hard maple. Not relegated to cookware – pantries, bathrooms and even garages are being retrofit to amp up their organizational quotas.

So where does the road lead next for the Grand Junction, Colorado couple? Jenny responds, “We’re still just pinching ourselves and taking it in stride, but for the short term, we’ve significantly ramped up production to respond to the increased demand, we’re building relationships, and pursuing opportunities.” Dave specifies, “Those opportunities are ranging from international distribution and licensing of the technology, to potential investment partnerships. At our current rate of growth, Glideware™ will be a multi-million dollar venture in a very short time, so managing the growth is our next challenge. We’ve already secured nationwide distribution in just the last two months and we get dozens more inquires weekly.”