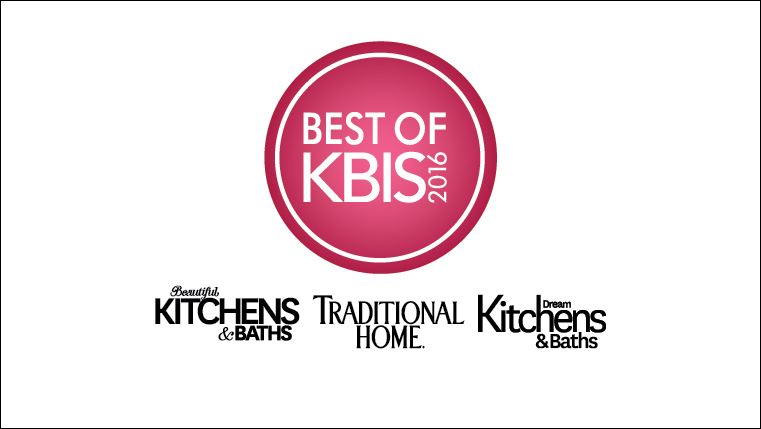 “Each year, the world’s most innovative kitchen and bath products make their debut at KBIS,” said Brian Pagel, VP Kitchen and Bath Group, Emerald Expositions. “For years, the Best of KBIS program has allowed those products to take center stage at the show, and, within the design industry. We’re honored to host the Best of KBIS Awards, the longest-running award in the industry.”

The Best of KBIS 2016 Award categories are:

To enter, exhibiting manufacturers must submit one application per entry via KBIS Connect. The deadline to apply is December 18, 2015.  For additional information about the awards and the application process, please download the entry guide by clicking here. A committee comprising five design professionals will judge this year’s competition. Judges will be named in October 2015.

All entries into Best of KBIS will be displayed at the show via “larger than life” product walls located in the North and South Halls of the Las Vegas Convention Center. This year’s Awards are sponsored by Beautiful Kitchens & Baths, Traditional Home, and Dream Kitchens & Baths, magazine brands from the Meredith Corporation. The Best of KBIS 2016 award winners will be announced on Wednesday, January 20, 2016 at 4PM on the KBISNeXTTM Stage in South Hall.

Following KBIS 2016, voting for the Best of KBIS People’s Choice award will take place online, via the KBIS Facebook page. From January 25 – 31, 2016, show attendees can cast their vote for their favorite products. . There will be three People’s Choice Winners (First, Second and Third Place). Winners will be announced in February.

The Kitchen & Bath Industry Show (KBIS) owned by the National Kitchen and Bath Association (NKBA) and produced by Emerald Expositions, is an inspiring, interactive platform that showcases the latest products, trends and technologies for the kitchen and bath industry. KBIS has been the premier event of the industry for over 50 years.

In 2013, the NKBA and National Association of Home Builders (NAHB) announced an agreement to co-locate the Kitchen & Bath Industry Show (KBIS) with the International Builders’ Show (IBS) under the banner of Design and Construction Week® (DCW). In 2015, KBIS and IBS announced their co-location agreement was extended through 2020. The mega-event returns to Las Vegas, Jan. 19-21, 2016, where each show will operate in various halls at the Las Vegas Convention Center. The NKBA and The NAHB continue to produce separate educational programming and special events. One pass provides access to both shows, as well as to DCW partner events: the International Window Coverings Expo (IWCE) and The International Surface Event (TISE).

Meredith Corporation has been committed to service journalism for more than 110 years. Today, Meredith uses multiple distribution platforms – including broadcast television, print, digital, mobile and video – to provide consumers with content they desire and to deliver the messages of its advertising and marketing partners.

Meredith’s National Media Group reaches 100 million unduplicated women every month, including 60 percent of American millennial women. Meredith is the leader in creating and distributing content across platforms in key consumer interest areas such as food, home, parenting and health through well-known brands such as Better Homes and Gardens, Allrecipes, Parents and Shape.  Meredith also features robust brand licensing activities, including more than 3,000 SKUs of branded products at 4,000 Walmart stores across the U.S. Meredith Xcelerated Marketing is a leader at developing and delivering custom content and customer relationship marketing programs for many of the world’s top brands, including Kraft, Lowe’s and NBC Universal. For more information, visit www.meredith.com.

Emerald is a leading operator of large business-to-business tradeshows in the United States, producing more than 85 tradeshows and conference events per year connecting over 525,000 buyers and sellers across ten diversified end-markets, including general merchandise; sports; hospitality and retail design; jewelry, luxury, and antiques; e-commerce; photography;  decorated apparel;  building; healthcare; and military. Emerald is headquartered in San Juan Capistrano, Cal. The company’s shows are typically the most prominent and important for exhibitors and attendees within their various industries. For more information on Emerald, please visit www.emeraldexpositions.com.

About the National Kitchen & Bath Association